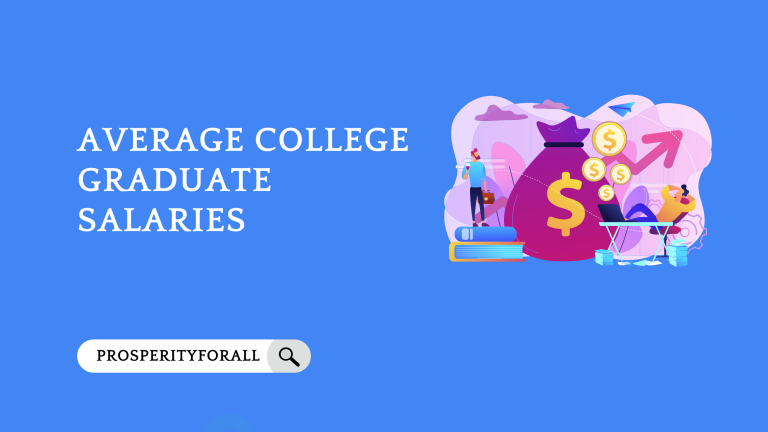 If you’re about to graduate from college or have recently done so, you must have wondered what would be your average college salary after graduation and what your degree will be worth in terms of future earnings.

Due to the fact that more than half of recent graduates have sizable debts (plus interest) to repay, most college students prioritize salary and benefits when looking for employment.

On average, people with college degrees make much more money than people without a degree, and the potential salary rises with each additional degree.

So here in this article, we will have a detailed overview of the Average College Salaries. We will also discuss the major stats like an average salary by degree, majors, demographics, and the type of institution.

Let’s get started with some general stats on average college graduate salary.

The average salary for graduate degree holders depends on the skills they hold and the knowledge they have.

There are many factors that affect the overall statistics, including the area in which the graduate lives, the college from which he took the degree, and the cost of living.

Among the degree types, on average, the more education you get, the more salary you will earn. It is important to complete your degree because the highest increase happens only if you have a bachelor’s degree rather than an associate degree.

Here is a breakdown of the salary by degree type.

The range of the salary also depends on the major subject you take to hold the degree. There is a wide range of salary packages offered depending on what subject you study for graduation.

Here is a detailed structure for the highest-paying professions and the projected average salary.

Need and the demand for the skills are also the factors that affect the average salary to enter in the job market.

There are some professions that pay a lower starting salary than the national average.

The above data shows the average salary offered to the different types of majors and subjects. There are various industries also that offer a wide range of salary packages.

Demographical factors are also a key aspect while getting paid. Age, Gender, and Race can affect the average salary of college graduate students. Here we will have a look at some demographic stats.

Generally speaking, wages increase as you age, peaking at about age 55. They then start to decline after that. Average salaries by age for all students, not just those with bachelor’s degrees, are as follows:

When talking about gender, the average salary figures reflect the majors and careers.

Below is the complete breakdown of salaries earned by males and females in 2020 with education degrees.

There is also an ethnic factor that sometimes affects the salary offered to the graduate student.

The salary package also depends on the prestige level that the institute holds. There is much differentiation in the data about the basic average salaries of those who have recently graduated from prestigious colleges or institutes.

Your potential salary is crucial when searching for your first job after college.

Nevertheless, you should perhaps take into consideration your capacity for personal development, your interests, and the general work-life balance you anticipate.

As we see, there are many factors that affect the average salary. You can consider all these points and go for the highest-paying jobs in the US.

I have shared detailed stats on the average college graduate salary. If I have missed something to mention, then let us know in the comment section below.