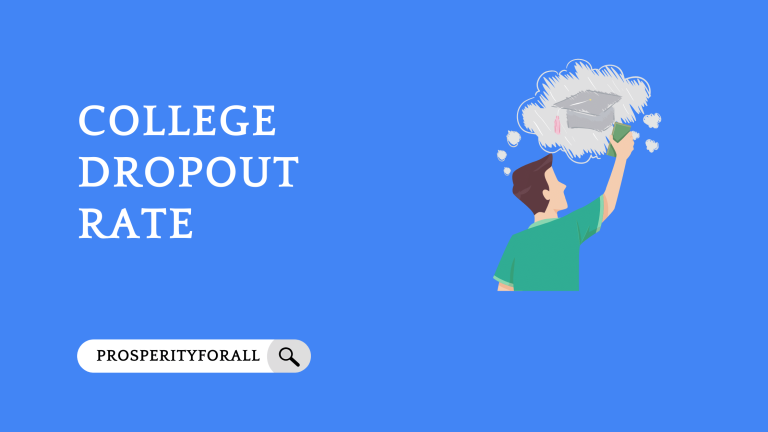 Your graduate study is the cornerstone of your career development. The time that a student devotes to learning and earning a degree makes him or her ready to conquer any adversity and helps to prepare them not just for a job, but it prepares for life’s unspoken difficulties.

However, we all know that a large number of students drop out of college each year.

Every year, over a million college students drop out. Students frequently find themselves in confusion when deciding if they want to continue their education due to financial constraints, family responsibilities, or dissatisfaction with their degree course.

According to research, dropouts face more economic difficulties due to a lack of college qualifications, connections, and professional life experiences.

This article discusses the college dropout rates, the reasons why students drop out, dropouts in various states in the US, and the consequences for those who choose to do so.

The College Dropout Rate in the US: Top Picks

Here is the data of students who drop out after their first year by institute type. (2019)

Dropout rates vary by various demographic groups, like race, gender, and age. Sometimes students who are counted as dropouts may have been admitted to another college without informing their first college, as is the case with all dropout rates.

Following are the detailed statistics on dropout rates by race.

More than one race

For students enrolled in four-year colleges

State-wise College Dropout Rates in the US

Many popular cities like Texas, California, and New York have the highest rate of college dropout students.

The rates of college dropout vary by region. The density of the population, the regional economy, and state education statistics all have an effect on college graduation rates.

There is a system of special education for students who have one or more than one disability. There are many students who drop out due to fewer accommodations available in colleges.

The Reason Behind Student Dropout

In the survey held in the year 2021, it is seen that 3,236 students between 18-34 age dropped out of college because of a lack of money and personal family issues.

Younger students are more likely to drop out because of low interest in the career stream and disinterest in college.

Statistics show that students with students who are having higher student loans tend to drop out from college thinking that it can reduce their expenses.

When students decide to drop out of college, a variety of factors play a role. Whether it’s rising tuition or demanding academics, similar reasons have continued to lead to college dropouts over the years, irrespective of a college’s audience, condition, or location.

But remember: Achieving a successful future requires continuing to pursue a college education. As a result, it is essential to comprehend how these challenges affect aspiring degree holders to prepare ahead and complete one’s degree on time.

I hope this article helped you with an appropriate rate of college dropouts. If we have missed something that is important and related to the college dropout rate in the US, then share it with us in the comment section below.