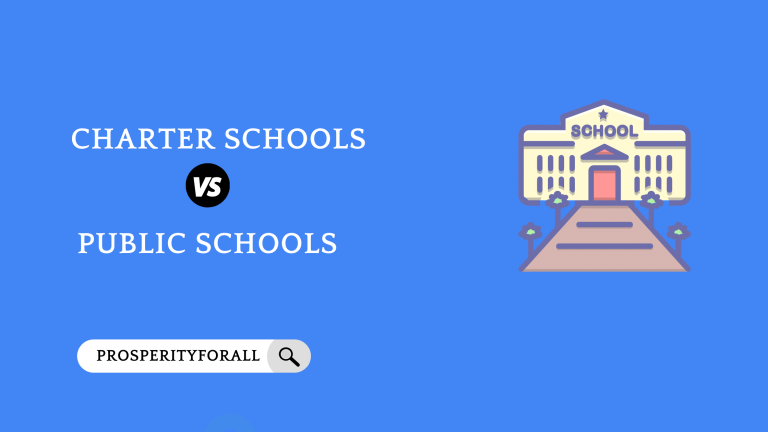 Selecting the right school for your child to attend is one of the most crucial decisions you will make as a parent.

There are many things to take into account when making this choice, including the standard of the classroom, the credentials and reliability of the teachers, extracurricular activities, classrooms, community outreach initiatives, and inclusion and diversity.

But some parents continue to wonder about the distinctions between public and charter schools, whether one is superior to the other, and how picking one over the other might enhance or impair their child’s learning experience.

Here in this article, we will have a look at some insights on charter schools vs public schools. Let’s understand the actual difference between both of them.

Let’s begin with a short overview of charter schools and public schools.

In essence, charter schools are independent, separate schools that a group of people decides to establish on their own.

They must still uphold a certain level of quality, though, and they are still held accountable.

Most of them are public institutions with no tuition. They typically diverge significantly from conventional public schools.

They are not subject to the rules and regulations of the school district, even though they operate under a written agreement with a district, state, or sponsor.

Funding for charter schools is given on a fixed and per-pupil basis, and they are also in charge of regulating such funds.

They have developed their own teaching approach and syllabus. The state board of education or other educational organisations that serve as authorisers are accountable for the performance of charter schools.

Usually, the state or federal governments are responsible for funding public education. From kindergarten through grade 12, they provide opportunities for general education as well as a variety of extracurricular activities.

They must adhere to state and federal laws even though they are developed at the district level.

Public school students study not only the fundamentals but also fine arts, social studies, science, and technology. They also participate in physical education.

The secondary level is where public schools continue. Additionally, students have the option to select some of the courses, which could include advanced math and science courses as well as a variety of foreign languages.

They also provide their students with a variety of extracurricular opportunities that help them develop their skills in a variety of areas, including speech, drama, sports, and music.

Public schools don’t have the option or flexibility to run independently, in contrast to charter schools. The state education board’s set educational standards must be followed by them.

Public and charter schools never discriminate against students who are accepted. The admission, however, continues to vary between the two of them.

If a student is not selected in the lottery, they will not be admitted. Even those pupils who don’t achieve the attendance standard are denied.

Charter schools are not strictly regulated because they are not governed by a single entity. They are autonomous and are required to adhere to the rules outlined in their charter.

By meeting these requirements, they receive funding. Public schools and charter schools must follow the same regulations regarding nondiscrimination, health and safety, and the length of the school year.

However, beyond that, charter schools run independently under agreements with the institutions that grant each of their unique charters.

Authorised charters specify clear educational goals but may be different from those required by various state or federal governments.

For instance, charter schools may decide to limit hiring to certified candidates, while public schools are only permitted to employ teachers who are certified.

In addition to having less oversight from the government, charter schools are not subject to the same transparency standards.

While charter schools are exempt from the Freedom of Information Act, public schools are subject to public scrutiny of their finances.

This enables managers and leaders of charter schools to consult one another in private and take independent decisions.

In reality, the boards or private individuals who own and run charter schools can be based elsewhere and appoint a different organisation to run the school.

Public schools lack this autonomy and are accountable to the general public. They cannot hold private meetings; all business of the elected school boards must be conducted in public.

Charter schools have a super versatile curriculum that allows them to adapt their course content to a student’s needs. They are exempt from a number of local, state, and federal laws that control public schools, which gives them this freedom.

Charter schools are flexible, but they don’t offer a lot of electives. Because they are electives in and of themselves, this is. They primarily provide tailored programmes that cater to the needs of kids.

On the other hand, public schools are unable to maintain a flexible curriculum. The local school district carries out the curriculum that the state education board approves for public schools.

Public schools provide a variety of electives, unlike charter schools. They frequently combine these electives with their graduation requirements.

As a result, even though they lose money for each student who leaves, their fixed expenses stay the same. Therefore, they contend that in comparison to charter schools, they do not receive enough government funding.

However, the Fordham Institute found that charter schools typically received 76% less funding from their own cities. This results in about $8,000 less money available per student. According to Fordham, six cities actually stopped funding their regional charter schools.

Charter schools compensate for their insufficient funding, however, through private donations.

Over public schools, they receive more private donations. However, donations only make up a tiny portion of each school’s annual budget. Thus, charter schools only have a $655 per pupil cost advantage over public schools.

Thus, the charter school vs public school argument continues until both sides are on equal footing.

In comparison to public schools, charter schools produce results that are more favoured by the general public.

Due to this, many parents hesitate to enrol their children in charter schools. In 15 states, the CREDO compared the reading and math test results between charter schools and public schools.

It was discovered that 37% of charter schools had improved their math test results. When compared to their counterparts in public schools, these improvement rates were, however, modest.

In contrast, math proficiency increased in another 46% of charter schools, which was just the average rate of improvement for students in public schools.

Now, let’s have a look at important statistics on charter schools and public schools.

There might be some cons along with the pros of these schools. To justify your decision, the following are some of the pros and cons of charter and public schools.

The pros and cons of charter schools are numerous.

In general, charter schools all differ from one another, so the best course of action to gain a deeper understanding of any school is to research or get in touch with the particular schools you are interested in finding out more about.

Charter schools can decide to be flexible with their curricula, operate with a certain amount of autonomy, and are free. If you have a child who has advanced academic needs and would love to specialise in things like music, drawing, etc., this is a fantastic option for you.

On the other hand, if your child is a sportsman, charter schools might not be the best choice for you. Charter schools struggle with inadequate funding, a lack of emphasis on extracurricular activities, poor academic performance, and other problems.

However, we don’t think they’ll convince you to keep your child out of a charter school. There were undoubtedly more justifications in this post that you could have used to support your choice of the type of school for your kids.