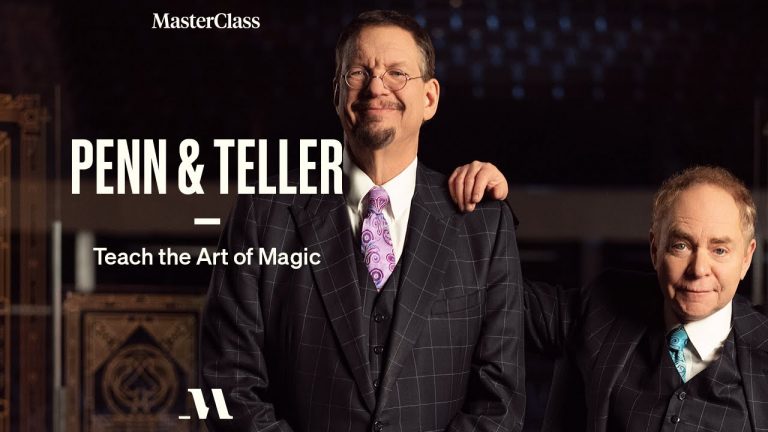 Magicians who have been actively hustling in the industry for nearly a century are going to teach you A-Z about magic and how to ace it.

Legendary sorcerers, Penn and Teller are taking us through the basics of magic to mind-blowing acts, and also teaching us everything about it.

In the end, I also share my experience in learning from Penn and Teller. Watch out!

Penn and Teller: Who are they?

Penn and Teller are a world-famous magician duo who have been impressing fans across the world since the 80s and still trying to keep up with the standards by implementing new tricks as well.

Known for their legendary performances in national television shows like The Late Show with David Letterman, Saturday Night Live, and many more, they have tricked the audience uncountable times.

Apart from performing in multiple stages and taking part in various acts, the duo had their very own tv specials hosted. One of the tv shows even was awarded and honored as “Best Reality TV Show”.

As mentioned earlier, the MasterClass handled by Penn and Teller teaches the basics of magic, how to properly do it, and understand the concept of confusing the audience by the use of magic. Additionally, they also help in capturing the viewer’s attention without their knowledge.

In this MasterClass, Penn does most of the talking while Teller visually explains the tricks by using magical props placed on a table. Sometimes even with humans too. Yes, they got more people.

The entire course has a well-structured way of producing lessons. As a bonus, they also give insight about most performed magic tricks and how easily you can learn them in few minutes. I learned a few of them.

The course does not just show video-formatted lessons and skip to the end, but they give us closure about the course by providing additional workbooks in a PDF format. Obviously, the workbooks do not unveil the biggest secrets of magic just like that but simple tasks for practice purposes.

Their MasterClass has 17 lessons which can be totaled up to 3 hours of watch-time. It did not seem long because each lesson had a specific topic/trick to cover and talk about.

Like, you don’t get bored at all because you will be able to see the behind-the-scenes of some of the biggest magic tricks as well.

My Journey With Penn and Teller MasterClass: (Lessons Reviewed)

This MasterClass had neatly curated lessons which I might call as secrets of Penn and Teller because they have got something for us in each of these lessons which turns out to be helpful.

As mentioned earlier, they have covered over 17 lessons where they simply do not perform basic magic tricks and make us feel like a fool but genuinely teach us “magic” and the secrets behind it.

Since it might take an essay to write all the lessons in detail, let me briefly explain and highlight the necessary takeaways from the course. This way, you’ll get an insight into how the lessons are.

1. Introduction to the world of magic

Penn and Teller initiated the course with a short introductory lesson which itself was interesting because they started doing tricks the minute they started the lesson. It was indeed a great start.

Even if you are not confident about the MasterClass, they assure you that you will be to do at least 100 magic tricks only by completing the course. I have taken the lesson, and trust me I have learned enough tricks to be able to start my YouTube channel already.

Apart from that, they dive into the teaching and get started with the work. Volunteers join the lesson which was well thought because you get to see how a trick works from the beginning.

2. Brushing up the basics

Once the introduction is over, Penn and Teller brush up on some basic tricks using cups and balls.

While performing and teaching those tricks, they also unfold a mantra that they follow, which goes by each suspense of a trick that covers up the next move and that was promising to believe.

It made sense and that is something to take note of from this lesson. As you perform a trick, you should be able to control the viewer’s attention in making the next move.

Penn and Teller open up about the famously known magic tricks performed using coins and cards in this section. Apart from telling only what the trick is about, they perform it without revealing the secret then do it again with full transparency for the viewers to understand the concept easily.

They give tips and tricks on using different techniques to do the same trick. This way, you can trick the audience into believing that they are two different tricks, but they are the same in reality.

In the midway, another well-known magician joins the table in teaching us. It was unexpected but it felt complete to have all the legends in a single frame to teach us what they excel at.

One thing which was shockingly new to me was the realization that whenever a magician tells us to pick a random card, it is not random at all. Apparently, the magician makes sure that we pick the one that they have already decided that we’d pick.

Magic or misdirection: which is right?

The lesson is very well curated and said to focus on the magic rather than the misdirection it brings. Every magic has a logical move which in turn convinces the audience that it is magic and not misdirection but if you see it from the magician’s perspective, he/she is mind playing and labeling it as magic. Sounds spooky? Yes, it is.

I thought magic was something a person was born with. Like a super-power but it is actually a way to play with people’s minds and observation. For example, in the cup tricks, the viewers constantly look at the cup and forget to concentrate on what the magician does with their hand.

That’s where the magic takes place when people are not giving attention to the details.

What did Penn and Teller teach me?

The learning process truly felt like a fun rollercoaster ride because I got to see the magic, do the magic and also learn the magic all the same time. Penn and Teller made sure that we learned a particular trick properly hence they took baby steps in teaching and unveiling the secret behind it.

I did not know magicians could be such great teachers too. The lessons were professionally clear-cut and a lot of tricks were included apart from teaching only the basics like simple rope tricks.

Though we know magic tricks are not actually tricks done by magic, there is some science and logic behind those tricks which are usually manipulated by the audience into believing it as magic.

Having said that, I got to learn the principles of performing a trick, the effect it can bring in the minds of the viewers, and also the cause which is made in order to ace a particular trick.

How is Penn and Teller’s MasterClass unique?

The instant thought that comes to people’s minds about taking up the course is that they could have watched magic videos and all the behind-the-scenes on a random YouTube channel but that is where MasterClass has excelled to my expectations.

You can watch those videos on YouTube but you would not be able to learn and ace the trick no matter how many times you rewatch the same 5-minute coin trick YouTube video.

Since I mentioned the course is a fun rollercoaster ride, you do not get bored after two lessons but feel the need to learn more and more tricks.

The smoothness of each lesson being streamed was one of the reasons for the course to be unique because not everyone would sit for a boring lecture about magic for hours.

The energy and vibe that Penn and Teller showed were impeccable.

Who can take this MasterClass by Penn and Teller?

Are you surprised that I mentioned people of all backgrounds to take this MasterClass by Penn and Teller? Well, the course is not destined or categorized to a particular group of students.

A person of any age who wishes to learn something magical can learn from these legends. There is no specific targeted audience or students for this MasterClass by Penn and Teller.

Even I opted for this course since I was bored and felt worthless. But now, I am kind of a magician myself.

Penn and Teller “Teaches the Art of Magic”: Pricing plans

There are no plans as such because MasterClass is servicing only a single plan, that is, All-access pass – $180/-

As for me, I opted for the all-access pass because I also wanted to learn something magical from the legendary magicians, Penn and Teller.

There are a few things that you are required to have beside you. The following are the list namely,

That’s all. With these, Penn and Teller teach you tricks you won’t believe that you’ll be learning.

Do I recommend Penn and Teller’s MasterClass?

It’s a yes for me because of how versatile the course was. The flexibility from focusing on teaching the students to ace the magic tricks did not feel like a MasterClass but a mega magic show with added training sessions.

You also get to become creative and invent new tricks all by yourself. It is the way of manipulation that you use on a person into believing the existence of magic.

To conclude, I would definitely recommend Penn and Teller’s MasterClass. 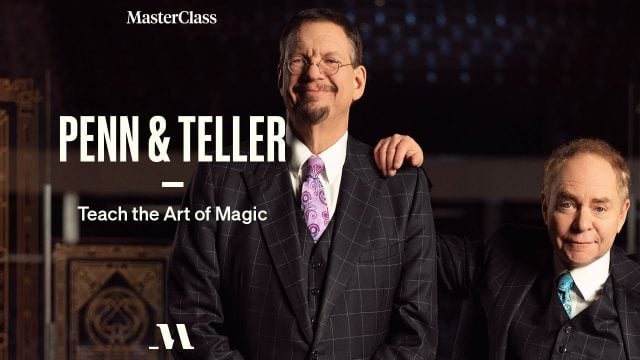 Pros & Cons of the MasterClass handled by Penn and Teller:

The following are the pros and cons of this MasterClass:

More than the learning, it was the experience to have learned from legendary magicians in the world. I was exposed to a wider spectrum of magic and the sciences and secrets behind it.

The journey was immaculate like I was left with no suspicion about the teaching of Penn and Teller because their teaching was perfect for any beginner to start with.

I also had the opportunity to witness their performance more closely. Sometimes I even paused the video to find out if there were any mistakes. You won’t believe how professional they were.

The MasterClass was something else for me, I would suggest you recommend it to anyone who would like to take a break from work or reality and dwell into the world of magic and also learn it.

How much does Penn and Teller’s MasterClass cost?

An all-access pass priced at $180 per year ($15 per month) allows you to access Penn and Teller’s MasterClass with other 80+ MasterClasses.

Can you get the MasterClass by Penn and Teller for free?

Unfortunately, there is no possibility that you can get Penn and Teller’s MasterClass for free.

How long will it take to complete Penn and Teller’s MasterClass?

There are 17 lessons which can take up to 3 hours of watch time.

Is Penn and Teller’s MasterClass worth it?

It is well-structured for anyone interested in learning magic in the easiest way possible.

Who can take up this MasterClass?

A person of any age who wishes to learn something magical can take Penn and Teller’s MasterClass.

We only want to help you make an informed decision while choosing an online learning platform and courses.